How Southgate Embodies What We Teach In The Classroom 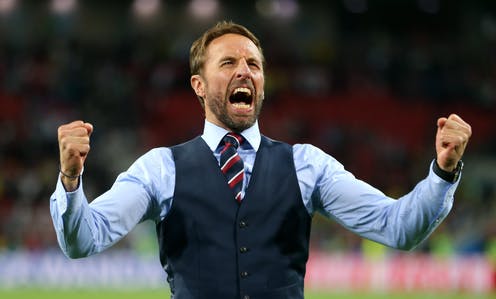 James Reeves, FBB’s Senior Grants Manager, reflects on the role that Gareth Southgate has played to create the environment for the England players to thrive as people, something we cherish at FBB.'We said to the player. We're going to have to, at some point, show resilience and come back from some setbacks and we did that tonight.'These were some of the first words uttered by Southgate as he reflected on what had just happened at Wembley.

He responded to Gabriel Clarke's line of questioning with an assessment that we can all relate to. But it was a statement which intimated why this England team has been able to climb yet another rung on a seemingly never-ending ladder. As they progressed to a Euro2020 final last night they shifted their narrative from a team with unquestionable potential, to a team which has an opportunity for success at the highest level.

I couldn't just enjoy the moment when I heard those words from Southgate. Because, among the joy, relief and the quick phone call to mum to check heart rates had stabilised, the work of Football Beyond Borders thrust itself back into my thoughts.

‍Jasper and Jack often recall a story involving a young man named Jordan from one of the first ever cohorts of FBB participants. 6 months into his FBB journey, castigating them. 'You're a snake, you're like everyone else.''You walk into our lives and then you leave.'Why? Because they couldn't promise him another term of the programme he loved due to uncertainties around staff time and finances. The feelings Jordan expressed that day motivated our co-founders to dedicate their lives to building an award-winning social and emotional learning programme which utilises the power of football to transform the lives of young people. When humans encounter difficult situations, our brains are programmed to behave in certain ways. Often, we succumb to the snake and ignore the ladder. For all of us, regulating our emotions is a task we learn. On TalkSport in the pre-game build up last night, Jose Mourinho suggested that Denmark would attack England 'emotionally'. Kasper Schmeichel frustrated us. Mikkel Damsgaard shocked us.

Fortunately though, Southgate had prepared his team to respond to adversity. His intentional work on their emotional regulatory response to setbacks created the conditions where they were able to thrive. Bukayo Saka crossed the ball and we climbed the ladder, instead of succumbing to the snake.

Southgate's relationship skills are versatile, thoughtful and nurturing. His team is reaping the benefits of a leader who has created an environment where people can be the best version of themselves.His responsible decision making was in play when, to the surprise of the nation, he replaced substitute Jack Grealish with Kieran Trippier. Trippier was composed, assured and helped restrict Denmark in the second half of extra time. There is something quintessentially irresponsible about English football, culture, school. That's a part of being human. Southgate has been socially aware enough never to get carried away, and educated every player in his team to be self-aware, confident of their individual roles in the collective success of the team.Marvelling at this squad, there is a sense that they represent us. Perhaps not as they appear, or with their intentions, or with their purpose. But with a unity we all recognise. Their connection resembles a multitudinal web of relationships which are built on unconditional positive regard, empathy and congruence towards a common goal. When any one of these things is missing from our lives, it is hard for any of us to be at our best. Southgate's England are one of the two best teams in Europe.

No matter what happens on Sunday, they have proved doubters wrong and given joy to millions. The squad have done so with an emotional maturity surpassing that of all England squads I have watched, despite having one of the youngest average ages in the tournament. Southgate has explicitly taught his group to be in tune with their full spectrum of emotions; to play with freedom, organisation and expression. The whole country is reaping the benefits. It is football for the future. That's something all of us can take forward as we ready ourselves to climb the ladder again. One day, if not Sunday, it is definitely coming home.

‍Donate to FBB’s Football for the Future fundraising campaign to help us develop the young leaders of tomorrow.